Survival (commonly now referred to by the retronym, Survival 1) was the first Survival Multiplayer world of the Dogcraft Server and one of the original worlds available on launch, alongside Amplified, MCMMO, Creative and Skyblock. Out of these worlds, Survival was the most populated world of early server history. Alongside the rest of the server, the world was initially opened to a whitelist of players on the 28th of September 2015 and later opened to the wider public on the 14th of November that year.

An announcement of a new, official dogcraft server was made on dogcraft.net sometime in late June or July 2015. The earliest public mention of the Survival world is found in a video by ReNDoG on the 7th of August 2015. Alongside these mentions, a forum thread was made for players to apply for building the server hub. Many players put their name forward, and a ballot was needed to select them. These players were subsequently invited to test the new world, and given the pioneer rank on server launch.

The world was launched without an end dimension, with the knowledge that the 1.9 update would change the end significantly. The end was added on the 21st of May 2016 with a large opening event.

An increasing amount of travel options were available throughout Survival.

Command warps were added as needed, with the exception of /spawn and /warp pigfarm which were present from the start of the world.

With the closure of the world, these commands no longer exist.

The Survival Railway Network (SRN) was founded months into the Survival world, and comprised a community-operated overworld public transport service that consisted of a number of minecart railway lines across the world that centered around it's Spawn Station. The SRN linked other major location and bases via secondary lines.

The Nether Transport Network (NTN) on Survival was the nether-based counterpart to the Survival Railway Network, which was based on high-speed transportation using of boats on packed ice to get around quickly. It was founded after the success of the SRN and just like it, the NTN could be accessed from a variety of locations across the server.

Several locations of major note have been created on the Survival world. 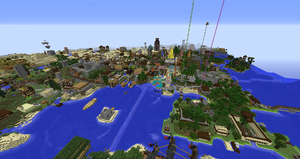 A wide shot of the Spawn City

The first settlement on any Dogcraft world, Spawn City is in close proximity to the spawn point of the world. Server pioneers begun building here in the first days of Survival, and momentum for the unregulated fledgling city carried until many months later. Spawn City is thought of as the largest city on the Survival World, and likely of any world.

An impulse decision by server owner ReNDoG during his first livestream on the Dogcraft server in May 2016 pronounced the founding of Stream Town. The town was created with the intention of being the scene of weekly streams from him. Server Headmods victix11 and StaircaseClimber are responsible for most of the infrastructure for the plot-based town. Stream Town was a relatively short-lived sensation, but had a continued legacy as a location for quests, builds, projects and server history.

Lackria was founded in June 2016 by William278. Along with SENsationals02, they set about creating a player-built, plot based city. The city expanded quickly and grew to become one of the largest and most talked about locations on the world. Lackria's player built and managed style became a major influence on subsequent cities and towns in other worlds.

On the 14th of October, 2018, it was announced that the Survival world, along with all other existing worlds would be deleted and replaced with the Survival 3 world the following week. On the night of Friday the 19th the world was removed and on the morning of the 20th replaced by the new world along with the update to Minecraft 1.13: The Update Aquatic.