The Dogcraft Creative Team is a branch of the Dogcraft Staff Team responsible for the planning, organizing and construction of official server builds and events. It was formed in March 2022 as part of a consolidation effort that led to the merging of the existing Build Team and Events Teams. The Dogcraft Creative Team was formed as a result, with the new branch being led by existing Build Team manager and [HeadMod],

The Creative Team combines the functions of the previous Build Team and Events Team and has private Discord and Minecraft servers for organizing and planning. This includes building spawns, network hubs, minigame arenas and event areas. In addition to building event areas, the team is also responsible for managing their operation and organizing public competitions. The team additionally liaises with other staff departments, including the Discord and Wiki for cross-community events.

As the Dogcraft Build Team 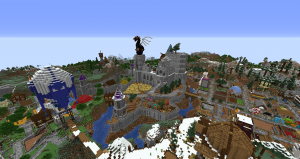 Server builds prior to the launch of the Survival 2 world were created by various members of the moderation Staff Team. The group was formally established in August 2017, just before the launch of the new world and was first led by

Wildfirev. The team was tasked with building the spawn of that world. Throughout Survival 2, the group completed a number of public builds, including the world's mall, public farms and an end island terraforming project. Public applications to join the team as well as recruitment efforts began during this time.

OldmanLP85 assumed role as the build team leader. The group worked on a number of projects, including once again the server mall and farms, the "AzkaBan" jail and a new iteration of the server Hub, which had remained unchanged for a number of years. In addition, the team began to organise frequent Build Battles; popular competitions that encouraged players to build within a theme on the server. Prior to the launch of the Survival 4 world, the group built the Camp Husky and Beagle spawn areas. During that world, the team built the Survival 4 MoleMart indoor mall as well as new iterations of the public farms provided by the server.

As the Cyberdog Events Team 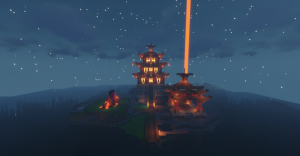 The Cyberdog Events Team, also known as the Dogcraft Events Team and originally formed as the Cyberdog Celebrations Committee, was created in late-2016 and comprised of

Abigai1. The newly formed group was tasked by senior staff with organizing public events on the server, such as annual holiday events and tournaments, and were given the special [Events] role in-game. Throughout Survival 1, the team organised a wide range of public events and promoted them through frequent Cyberdog News Network (CDNN) YouTube channel briefings. However, by the end of the Survival 2 world, the team was largely inactive.

In late-May 2019, the events team were brought back by the HeadMods, comprised of

RY44. The new team organised a wide range of popular events and brought back the CDNN YouTube channel. In January 2020,

William278. The two were replaced by

SummerFlower1234 was appointed a member of the team.

As a result of the retirement of OldManLP85 from their position as events leader and in an effort to improve cross-collaboration, it was decided to merge the teams into a new entity - the Dogcraft Creative Team - under leadership of events leader and build team manager

SummerFlower1234. The merger was completed on March 16th 2022, just prior to the launch of Survival 5. The first project completed by the newly consolidated team was the four spawn areas for the new worlds: Corgi, Labrador, Shepherd and Akita.

- Events on survival 5 have been different compared to previous events. That is them being smaller compared to previous ones. We wanted to focus more on the fun aspect of the games more than any decoration! That doesn't mean there are no decorations, or fancy builds, but we are prioritizing games first! Each event has (a) project leader(s) and they are responsible for leading the area.

- So far, we have had 2 events open in 3 of the worlds. Being, Polar palooza (Snowy Shepherd, and Corgi Carnival), and Harvest Halloween (Labrador). There are more events in plans, and way more to come in the future, so stay tuned!

Currently, this process isn't open for the public. Wait till there are any news.