Spawn on the Survival 2 world was the point of origin for all players joining the world, and the center of the World Border. It featured three kingdoms built in different styles and a castle to mark the gateway to the world. Dotted around these areas were groups of purchasable plots for players to build in. The plots were a one-time permanent purchase using /buyspawnplot. The area could be accessed using the command /spawn in-game, which teleported the player to the rules room windmill at Spawn.

The large Spawn area was split into themed districts with plots of differing colours at each.

The Dwarven area of Spawn was the biggest out of the three and featured one of the most notable builds of Spawn, the formidable Spawn Castle in the centre. The main building style here can be described as medieval and rustic.

Dwarven mines - the gateway to other underground areas

This area featured two sets of player plots - yellow and brown. These plots proved to be the most popular, because of their proximity to the spawn point windmill.

Several lore-driven hidden builds were built in the Dwarven Kingdom. The Dwarven Mines, an elaborate ravine, led to both the Crystal Caves and Thief's Guild. The Caves connected the area to the Elven Kingdom through an underground passage. The original proposal for the Thief's Guilds would have had it use admin shops to sell players unobtainable items for very large sums of DCD, although this was later scrapped.

Centrepiece of the Elven area

An area further south of spawn castle was the Elven Kingdom. It was the smallest of the three sections of spawn. The main build in it was a fantasy style basin with waterfalls and greenery, and a bridge through the middle. The basin had a tunnel connection to the Crystal Caves and therefore the Dwarven Kingdom. A small set of cyan plots were nearby.

The Human area was located near the south-eastern boundary of the castle wall, and was split into two main sections. The first was a large garden, featuring a hedge maze and a biodome, among other natural attractions. The other area was centred around a large jousting arena and housed the largest number of plots, which were pink.

Wide view of the Human area and its pink plots

Located to the east of the castle was the Events Committee Headquarters for Survival 2. Although initially intended to be a place where the events of the world could be documented, it wasn't utilised after the world launched.

The only public farm on the world was the Spawn wheat farm. Although located in the Dwarven area, the wheat field took on a well-known life of its own as the saviour to many new players, but also somewhat infamously as the leading cause of many moderator warnings. 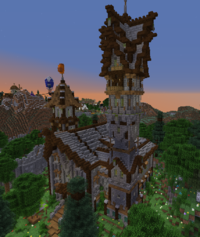 The server nether hub was accessible from Spawn, in the form of an impressive diamond-shaped room with lava ceiling.

Spawn Station was a railway station intended to help players to find a place in the wild, or explore the world. It was operated by the SRN.

A Scooberson Hidey Hole was also hidden underground in the Dwarven Area.

Extensive lore was written by

Wildfirev to explain the placement and contents of the Spawn area. The central storyline uses names from the team that build the area. In the story, several characters find the source of tremors that are occurring in the land. It turns out to be a large crystal that their ruler, King Rendog covets (this crystal can be viewed in-game). They rush to tell him and while returning to the crystal, they are confronted by an army of wither skeletons. The full script can be viewed on the forum.

The plot system used in Spawn was not particularly successful. Although around a third of the plots were bought, only around half of those were fully completed.

Most players were not focused on the decorative and lore elements of Spawn, preferring to leave quickly and start a base first. Common comments on Spawn were that it was too big of an obstacle when attempting to leave, somewhat confusing in layout, and it did not have an active local community. After a few months of Survival 2 being active other player-built settlements had become more lively, with bigger active communities. 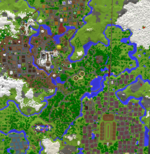 Map of a large portion of Spawn

Much later, in 2018, an attempt was made to entice people to explore Spawn by moderators. 'Hunt the mod' was an occasional game where dcd was offered to players for finding a hiding moderator in the Spawn Area.