The Server Hub is a gateway to all other worlds on the Dogcraft Server, and is the place where players spawn when joining the server for the first time as well as serving as a place for players to play around with gadgets and cosmetics. It also serves as the fallback server, where players are sent to during restarts and maintenance. Players can travel between worlds through the usage of the /servers command.

Throughout the history of the Dogcraft Server, a number of server hubs have been in place.

On the 7th of August 2015, server owner ReNDoG posted a video of himself and others building the first server hub in a livestream. On dogcraft.net, a forum thread was created for members to apply to assist in this process. A ballot was required to select players for the job and these players would go on to test the original worlds of dogcraft and hold the pioneer rank. 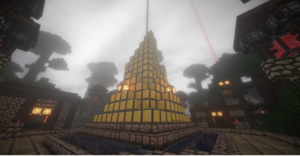 Grannydog's Monument; the centrepiece of the original hub.

The first hub was based on ReNDoG's original survival series, and featured many builds from it, as the portals to each world. Some builds included his Nether Portal Temple (Nitro UHC), Beatrice's House (Survival), Grannydog's Monument (centerpiece), the Cyberdog Monument, and Big Mac's Pen, among others, and they were connected on a jungle island by paths. It also contained a couple of obscure builds. One, a small ruined building with an Iskall85 NPC in it. The other was named Matti Manor, after the admin of time,

Mattigins. The only ways of accessing the build were using the hub jetpack item (purchasable from the dogcraft.net shop) which granted fly mode in the hub, or finding a hole in the barrier blocks that surrounded the hub. The latter was an encouraged game by the admin, who would award 5,000 dcd to whoever found a way out, a significant amount at the time. 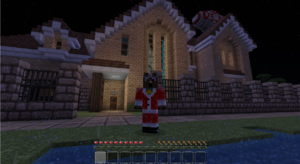 The Matti Manor, "home" of

Mattigins on the original hub.

The original hub was destroyed after a server-wide hacking attack on the 23rd of February 2017, and was subsequently rebuilt as the second hub. 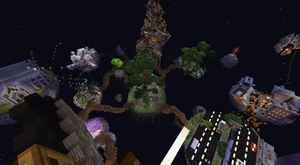 The second hub, above the void.

The second hub was an island built over the void, constructed by the Dogcraft Build Team in early 2017. Similar in layout to its predecessor, the hub was comprised of various build team member builds. Surrounding a central tree, floating paths branched out into six main areas; Minigames could be accessed on a ruined city street, Amplified could be joined from one of

EwanWatson's builds, Survival 1 and Survival 2 in a mini jungle biome and there were also portals for Creative and MCMMO. Finally, a patreon hall which had signs thanking patreons of ReNDoG. The Creative portal in particular went through multiple iterations before the current one, and the central tree was also expanded close to the opening of the hub. Sign with positive messages and meteorite builds at all heights are dotted around the hub in addition to several hidden places and easter eggs accessible only by use of the hub jetpack, which was the most expensive item that can be still bought from the Dogcraft shop.

After Dogcraft updated to 1.13: The Update Aquatic, much of the meaning and functionality of the hub was lost as the old Minigames and Survival worlds were no longer accessible. A side effect of the updating was that the patreon hall required rebuilding after the update broke parts of it. As a result, it was decided in 2019 with the update to Minecraft 1.14 that a new hub would be created. A world download of this hub was subsequently made available. 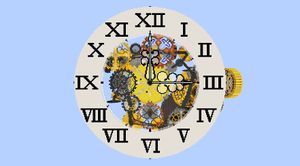 The current hub, as viewed from above, displaying the time as three o' clock.

The current hub was built again by the Dogcraft Build Team, notably that of

RoseRedTiger. The hub follows the theme of time, as cogs form the iconography of the Dogcraft server and website and thus it features many floating gears and mechanical components to embrace this. In fact, the hub itself takes the form of a clock when viewed from above, complete with hands and clockface, which can actually be seen in game by travelling up a parkour course across the gears and cogs. Above the hub, pixel art in stained glass of the Dogcraft cog can be found high in the sky.

On a side note, the Clock hub was never originally meant to be the server Hub. The builders were originally tasked with creating a Mini-game lobby, with the theme of "pocket watch". Due to game mechanic changes and updates to the GUI system, there was no longer a requirement for a mini-game lobby, and therefore it was decided to turn this in to the server hub, when survival 3 updated to 1.14. Ironically, the hub was actually created in 1.13.2.

Unlike previous hubs, the current iteration does not have areas for portals and rather relies on the usage of the /servers command for player navigation. A new interface for players to access gadgets and cosmetics was also added at the same time, as well as updating the actual hub version to 1.14.