During critical maintenance that lasts a number of days, the server has had Temporary Worlds setup for players to play on during the period of maintenance. These worlds are separate from the main server and are not accessible via the hub. Instead, they run vanilla Minecraft and are not moderated by the staff team.

The first temporary world with recorded evidence was made on the 11ᵗʰ of March 2017, during a maintenance period. The world was up for approximately 48 hours.

The world was an entirely vanilla 1.11 world. The seed was random and no plugins were used. No serious attempts of moderation were made.

Very few builds were created in the world, and most near spawn were quickly greifed. A hacking player appeared on the server, which regular players took great pleasure in outrunning and negating the hacker's goal to cause havoc.

On the 17th of November, 2018, the Dogcraft.net network required critical hardware maintenance for an undefined amount of time[1]. During the downtime of the server, a Temporary Server world was put up in its place for players to enjoy while the server was down[2]. The world was only meant to last for a few hours and at most a day, however as maintenance time grew the server remained online for longer than expected.[3] 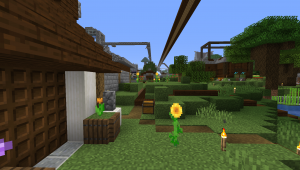 Another image of the spawn area of the temporary world.

The server was a pure vanilla 1.13.2 world put up quickly as a temporary measure. A random seed and spawn were used and there were no plugins installed to prevent griefing. Despite this, moderators still moderated the world to reduce cheating as much as possible.

As the world was only temporary, builds made on it were mainly small-scale homes and shelters meant to last until the main server went back online. No major bases were founded and many players stuck to the simple spawn area to build in.

It was specifically announced that a ban on this server equated with 1 warning on the main server. It is unknown if anyone was ever banned.

On the 2nd May, 2019, once again a period of maintenance was required to add performance improvements to the server. As a result, a new temporary world was setup to coincide with the work being done.

The server was a pure 1.14 vanilla world, with a random seed. Once again, there were no tools to prevent griefing or cheating but this time moderators did not moderate the server to stop this.

A small spawn platform was built before the temporary world was opened and the spawn was nearby to a village. The village proved important as a small community village to camp in during the maintenance. Ultimately, though, there was little time or reason to develop large scale builds so most builds were small scale homes. The ender dragon was defeated in the world's 20 hour lifespan, an effort headed by Mrs_Diss.

There are reports of at least two temporary worlds before 2017.

On the 12th of June, 2019, the Dogcraft Server unexpectedly went down, and a 1.14 testing server was made publicaly available. The main server went live again after 2 hours and 13 minutes, making the active period of this temporary server by far the smallest.