"Ever wanted to see your base from space?"

Server Web Maps are recurring features of the Dogcraft.net Minecraft server. The current "BlueMap" plugin was implemented part way through the Survival 5 era.

The BlueMap displays an up-to-date block-level map of the world, which can be viewed from top-down or free flight perspectives and is searchable by co-ordinates. The map can be accessed via the green map button on the Dogcraft.net website. Here players can select to view maps of each of the four current Survival 5 worlds and it's Mall, or legacy maps of the two Survival 4 worlds or the Survival 3 world. Earlier worlds are unavailable given that were live some time prior to a total hardware switch which took place at the beginning of the Survival 4 Husky world.

The first available web-based map of a Dogcraft world was in during the early history of the public server. The "Dynamic Map", more commonly referred to as the "Dynmap" after the server plugin that it uses, provided both a two-dimensional and three-dimensional live preview of the original Survival, alongside the MCMMO and Amplified worlds. The live position of players on the server was feature of this map. The Dynmap was available throughout most of the history of the first Survival world and saw great usage and enjoyment from players. In particular, it allowed for early organisation of the Survival Railway Network (Survival 1) as the map allowed for a basis for planning railway lines efficiently and effectively through a network map. 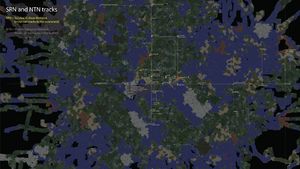 Map of the SRN on Survival 1, based on an image from the Dynmap.

Unfortunately, due to a lack of disk space on the server as well as a myriad of performance issues, the original Dynmap was unstable and failed to update most of the time. As a result, the feature was retired in the latter part of the world and didn't see a return with the addition of Survival 2 or world reset of Survival 3. To act as a replacement for the Dynmap, members of the newly founded Havana city began the Great Survival Map project, to allow for the creation of maps such as one for the SRN on the new Survival 2 world. This project would carry forward into the Survival 3 world in the form of the Grand Map, a project which successfully managed to map the entirety of the world within the 20,000 x 20,000 block border.

With the launch of the first of the two Survival 4 worlds; Husky, as well as the move to more powerful dedicated hardware, administrator

Ironboundred suggested the possibility of the Dynmap returning. Finally, on the 5th of May, 2020, the dynmap would see its return after three years of absence as a major server feature. This iteration was only available as a top-down, 2D preview, but for the first time showed the location of player claims as a toggleable option. However, due to increasingly frequent blackouts, the dynmap was disabled for performance reasons around the middle of 2021.