The Survival 1 Spawn (frequently mentioned with the suffix 'City' or 'Town') was the starting point for all Dogcraft Survival worlds and features many of the earliest builds in the server's history. It features arguably the largest city on any of the Survival worlds.

The spawn point of the world is located in a replica of Silkworm Gang Island, a major feature of ReNDoG's Season 3 of Survival posted to YouTube which occurred in a similar era to the opening of the Dogcraft server.

Upon dropping from the Island's fort, players must walk through the adjoining underwater tunnel, also built by ReNDoG, before reaching a rules room. Players may then enter the city component of Spawn.

Early in the the history of Survival 1, headmods ruled that the 'spawn area' was a 1000 block radius from the spawnpoint. This area was subject to special rules. 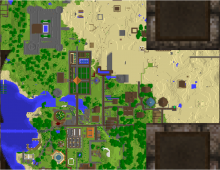 A sideways map of spawn, circa November 2015

Server Pioneers created the first buildings and road in October 2015. Most builds were made along this central street, however before launch, the MoleMart was the only build that was constructed in the soon to be spawn city, making it the oldest building in spawn. At the end of the street, perhaps most significantly, NBStuart built the beginnings of the public vegetable farms along a branching road heading west.

Upon public launch of Dogcraft in the second half of November 2015, Spawn City developed very quickly. Buildings and houses of players appeared daily and roads were extended to match as needed. Many major buildings in the city today started here. Along the main road in the northern direction, an unfinished welcome centre with accompanying shop built by MasterMind_DC , a recyling center built by

vikmans and enchanting facility and nether portal were built.

_edo constructed a public tree farm alongside his distinctive sandstone builds on the central waterfront. Drakfluga created a large castle near the western shoreline. Mr_Dawgie built a newbie town in the western desert. Further in a similar direction, asgogg created a large town build that eventually met the city outskirts. The public food farms were expanded and Scooberson's Banner Gallery was built next to them. EwanWatson and Lord_Faldin were among the more prominent early builders in the east of the city. jjminedogs and Venturian77's base was the main feature in the south of the city. The distinctive prismarine topped towers on the desert edge were built around this time. Demand for a shopping district was fulfilled when a river near the centre of the city was filled to create new land, but was unregulated (and eventually replaced by the mall in the months following).

The new year continued the run of high activity at Spawn. A short lived discussion on naming the city ensued, with no particular title gaining any traction, with the exception of the name 'Hoofstad', the dutch word for capital. Some relics of this name still remained in the city upon closure. Blued0g expanded significantly during this time, building a large castle and molehill, in addition to a mini-town called The Oasis in the southwest of the city. A proposal to fit the city with walls was pushed by _edo, but was not especially supported, and only one small exemplar section completed. jjminedogs gradually acquired a very large amount of the land and builds in the southern area of spawn, on the east side of player spawnpoint. darparniox expanded to have a majority share of the smaller northern area of the city.

Southwestern coast of the city

In March of the year, LAK3RS and Mr_Dawgie were given parcel of land in the central city and set about building a 2:1 scale replica of the Grannydog Monument, from the same ReNDoG survival series as Silkworm Gang Island. In the same period, _edo had theorized the beginning of a railway network, and approached Mr_Dawgie about using the monument as a central station, resulting in the newly formed SRN's Spawn Station. Increasingly, small and quickly abandoned builds and shops were more regular than the slowing activity from established players. By this time, uncomplicated and medium or larger spaces of land were almost impossible to find without travelling to the outskirts of the city.

The establishment of Stream Town in early May 2016 had a major impact on Spawn. Attention shifted to the newer town almost overnight and continued for the following weeks of the Stream Town 'boom'.

The skyline of northern Spawn City was littered with large towers

General activity in Spawn City was limited from then on, with few exceptions. In mid 2016, efforts were made to plan and build roads in the previously underdeveloped northern areas of the city. This successfully stimulated moderate building activity over the next months, headed by tall builds of Bestfreestylist, Zhul, and FreakSound. Other notable builds from around this era include Y3Y3's build and adjacent headquarters for the Junk'n Scrap company in the West and the large 'Denia Manor' in the northeast swamp.

Some staff endorsed activity in the city also occurred in this time frame. A ship with NPCs of current and previous moderators was created right next to the spawn island. The awkward immediate road from the rules room was expanded into a full plaza in around September, the center of which hosted various monuments, usually based on the nearest holiday. In November, the words 'mart', 'trains', and 'farms' were built at build limit height, with the purpose of showing on maps of the city.

Activity in Spawn City was very sparse in the year 2017. Some extra houses and builds in the north and west, and additional player-built ships in the water surrounding spawn island are the only activity that can be pinpointed from this era. The most notable of these was a large castle/tower crossover near the edge of the desert northwest.

Upon the opening of Survival 2 in September 2017, any remaining interest and activity essentially ceased in the city.

Spawn City was lost with the closure of Survival 1 and 2 in October 2018. A file of the city can be found in the downloads article.

Spawn City was never managed by any one or more appointed people, rather by 'staff' as an entity, but with various individuals making decisions. The few management decisions made were sporadic and reactionary to situations that arose. The leading theory for this approach is the tight-knit nature of the early community and how peaceful players could be, reducing the need for leadership and structure.

Therefore, the city grew in a wholeheartedly organic fashion throughout its existence. This had several implications and was the defining characteristic of the city, especially when compared to other towns and cities in later worlds. 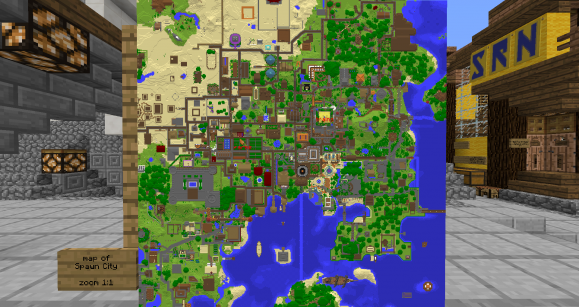 A re-created map of the final Spawn City. The original map was displayed in the same spot at Spawn Station.