The Townpocalypse was a notable event that took place during the mid-2018 of the Survival 2 world in which many new players created public settlements across the world, inviting players to their towns and cities.

The term "Townpocalypse" is a portmanteau of the words "Town" and "Apocalypse". The word was coined by players in the Survival Railway Network community though found widespread use across the server to describe the rampant amount of settlement construction that took place across predominantly May, June, and July of 2018.

Though the word has negative connotations with the word "apocalypse", few would argue that the rampant expansion of towns had any sort of negative effect on the server, despite the questionable quality of some player settlements.

Though no definitive reason can explain the sudden influx of players wishing to create towns and cities, there have been plausible theories and explanations as to why so many players were interested in doing so at once. Primarily, players attributed the huge popularity of the Havana Base Tour, uploaded by ReNDoG on the 23rd of April 2019. Many players were attracted to the server after watching the tour, with some joining the city itself while others opted to start out on their own to found their own town. 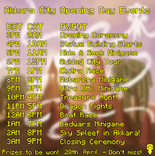 In addition to the Havana Base Tour, another event took place just a week later that further boosted player interest in settlements. The Akkara City Opening Day event took place on the 28th of April, and was live-streamed by ReNDoG who toured the town and played rounds of Nitro UHC on the server. These two events both worked to drive player interest dramatically leading to the effects of the Townpocalypse.

During the Townpocalypse, the number of towns built on Survival 2 skyrocketed. Many people began to work on, planned, or opened towns across the server. Some towns were smaller in scope, acting more as public bases, while others grew bigger, assembling larger communities around them. The activity in these towns always fluctuated and the quality varied, though new towns were constantly filling the void as others grew inactive.

Some players felt mixed opinions regarding these towns, finding the prospect of "yet another" town opening uninteresting, while others were excited by the variety and buzz around the new developments. Often times, new towns featured smaller, more focused communities while others had multiple leaders. The developments during the period would lead to an influx of new builders joining the server and it could be argued that it further helped cement Dogcraft as a server attractive for large-scale builders.