Unofficial servers are the spiritual predecessors to the current day Dogcraft Server. Although much is unknown about the unofficial servers, some details have been recollected.

The unofficial servers were created and used by members of the Dogcraft.net website, a fan community forum focused on ReNDoG. It is presumed that as the small community grew closer, interest in a minecraft server eventuated. The exact opening date and the minecraft version of the first unofficial server is unknown - they potentially span back to late 2012 shortly after dogcraft.net was founded, a time when the current minecraft version was 1.3. However, it is more likely that they began on a later version, in a time when Dogcraft was more established as a community.

Each server iteration was owned by dogcraft member

SGHUK, who was also admin of the server, and at points accompanied by

Mattigins. ReNDoG did not directly endorse the server, and it is unknown whether he was fully aware of it. The servers had small, tight-knit communities. This was predominantly because of the whitelisting process for the server on Dogcraft.net, and the lower popularity of ReNDoG at the time, who had around 30-100 thousand subscribers during the period. The server convention was to perform a world reset for each new minecraft version. Some plugins, such as the popular multiplayer plugin 'Essentials' were present.

The earliest confirmed unofficial world was set in 1.6: The Horse Update. Very little is known about this world. However, it has been said that there was no large spawn area, but a significant mall area. The mall featured a fountain on one side, and a large town hall-like building on the other. This area also contained a running ReNDoG NPC with a "flailing sword". Frequently, this confused new players who believed to be the real Ren, especially those unfamiliar with multiplayer plugins. A small moderator team did exist. 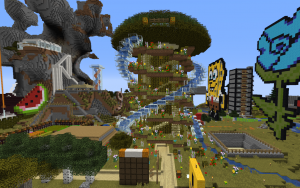 The 1.7 world was similar in many respects, and more than likely launched in late 2013, some time after the release of The Update that Changed the World. The world originally revolved around a birch wood platform at the spawnpoint. Quickly, it was expanded into the 'Spawn Tree' by

OzzIt, with a water cascade and spiral path to the roads below. West Road led to the community nether portal, and jail. East Road was much longer, with several splits that connected most of the area. One building along East Road was a Mall building, featuring shops from the likes of

Scooberson. Other features included a collection of buildings by

Nick_Gubbins, and multiple statues, an invisible maze with barrier blocks, and several public farms. A large map of the area was updated regularly. 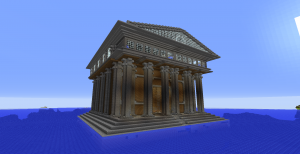 The second spawnpoint of the 1.7 world

The spawnpoint was moved at some point to a large building in nearby ocean. This building included links to the rules of the time, and three warps; to the original spawn, now dubbed 'OldSpawn', to 'wilderness', and to 'monument'. The co-ordinates of the latter two locations are unknown. The building also advertises a TeamSpeak server with the ip 'dogcraft.net'.

Other builds are known of, such as Scooberson's Mansion. The player

DiamondDeb recorded a video series on the world, but it has been subsequently removed.

A unique competition was held on the world. The Joey Run was a challenge held upon request that paid homage to the infamous acts of

Joey1717, who escaped from the server jail and made for it down East Road. He was chased by moderators on foot until killed. Players would start the Joey Run at the jail and run until caught, with the goal of eclipsing the previous farthest distance along the road without capture.

The world made use of several extra plugins, such as rare player head drops and a land claiming system.

A 1.8 world was likely created in the months after the release of The Bountiful Update in September 2014. The server maintained a similar playerbase to the 1.7 iteration, averaging around 10 players online. It had a small spawn area, featuring paths and rustic builds, and a nether portal build by

Chibikun. Notable is the casino in the area, and that the server had few plugins. 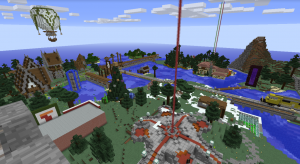 Spawn area for the 1.8 world

Due to the gradual formation of the official server, player numbers on the 1.8 world dwindled during 2015. The unofficial server was discontinued at some point shortly before the present day Dogcraft Server began beta-testing of in September 2015.

The admin and owner of the unofficial servers, SGHUK, disappeared and has not been seen since, a large loss to the community. His motive is not known for certain, but it is dubious as to whether he was consulted during the creation of the official server.

In addition, it is difficult to pinpoint the effects of the unofficial servers of Dogcraft. At the least, they showed the demand for a multiplayer server for fans of ReNDoG. At the most, they may have inspired him to start the official Dogcraft server that is in place today. In any case, they have had a large impact on the Dogcraft community in the years even after their discontinuation.