The Town of Wanigoora was founded in June of 2017 by OPwrecker. The town was located in a plains biome, adjacent to a swamp. The name of the town was the result of a suggestion on the dogcraft.net forums. It featured a small railway station, and a respectable number of buildings, around 10-15, in addition basic roads. The build style of the town was not specified, leading to simple and clean architecture. It was founded in the twilight of Survival 1's reign as the most played world, so was not given full opportunity to mature as a settlement. It was located between Spawn City and the SRN East Station.

The town lived on through the very similar Wanigoora 2.0, on Survival 2.

One of the most notable builds was Wanigoora Station and the surrounding mini-mall, seen below. Early screenshots of Wanigoora can be found here: Imgur 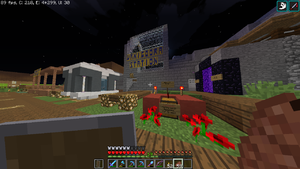 Wanigoora Survival Railway Network Station
This page was last modified on 27 January 2021, at 05:11 (2 years ago) by Darparniox.
Categories: