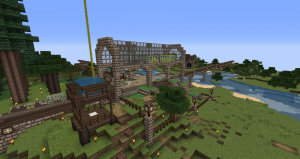 East Station on the original Survival world, the first to be built with the standardized design.

"A standard station design is also used, but the only component of it that is required is the basic platform with minecart dispensers, and a design that deviates from the standard can be used as long as it fits its surrounds."

Railway Stations on Survival 1, which formed the Survival Railway Network were the first of its kind on the Dogcraft Server and would define the systems of travel used on subsequent Survival Multiplayer worlds, with their influence and basic layout still being emulated in the network's current iteration. On the first Survival world, most Main line stations; albeit with some exceptions, followed the same documented design, with alterations to palette and shape made to accommodate local terrain.

The design, created by

_edo, featured a central raised stone platform with curved glass roof bearing the station name in banners on the side. In the early days of the Survival Railway Network, the uniformity of stations allowed players to become quickly familiar with the railway system. The intuitive design boosted the network's recognition thereby elevating the project's status, while simultaneously making it easier for players to navigate the world.

SRN stations were comprised of a standard platform, with terminals that could summon Minecarts.

Although a standardized design was in place for public railway stations, players were encouraged to adapt station builds to the surroundings. For instance, Mesa Station was comprised of red sandstone blocks rather than plain stone bricks. The design itself is centered on a 23x7 raised platform, accessible via stairways. On opposite ends of the platform would be minecart terminals that could collect and summon Minecarts for passengers to use. Freestanding columns would support an arched roof, upon which banners would be hung displaying the station's name. All stations would also be equipped with utility stations, including an ender chest, publicly usable chest and crafting table. Later, stations would be fitted with hot-air-balloons or other access portals to allow connection to the Nether Transport Network system. As the world progressed, experimentation with stations became more popular. Notably, stations like Dressrosa featured custom platform designs more fitting of the base it served. In future worlds, designing unique stations for each stop along the network became preferred among SRN builders as players preferred variety; one critique of the standardization of railway stations is that it became monotonous to travel the network after a certain point.

Railway stations often additionally featured stables where skeleton horses could be stored for new players to use for faster travel on ground. This was an extension of designer

_edo's previous efforts in spawn city to build public stables in aid of improving the experience for players. 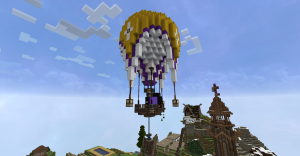 The yellow hot air balloon at North Station on Survival 1.

Perhaps the most unique and recognizable quirk of the Survival 1 network to players looking back was the presence of hot air balloons at many SRN stations, which served three main purposes: 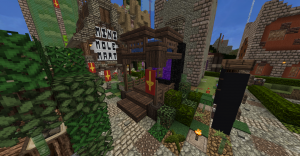 A "goxy-drop" catcher was positioned next to the portal under balloons so players could drop down safely.

All hot-air balloons built on Survival 1 featured the same standard design, but each balloon used a different color. The color of the balloon corresponded to the color coding of each SRN station's "Nether" station on the NTN. On the network map, stations with hot air balloons were denoted with a small symbol.

The design of the server's hot air balloons attracted praise from many community members as a novel solution to the problems with ugly elytra towers (that led to an implementation of a rule banning them within spawn) as well as helping resolve portal synchronization problems; the NTN on Survival 1 was positioned just below the bedrock of The Nether ceiling, making linking portals with stations at lower altitudes challenging if there were nearby bases in the Overworld or other portals in The Nether. Despite this, the introduction of rocket-powered elytra flight, combined with the complexity of building a balloon compared to a station meant they became less popular as time went on and hot-air balloons did not return into service for the succeeding Survival 2 network.

The design of SRN stations has been referred to "iconic" by a number of Dogcraft.net players through the years. A number of features first implemented in the stations of the original network have stuck, such as the hanging of SRN-brand banners, the presence of amenities such as maps and utility stations as well as the terminal design, which has remained relatively identical aside in principle, aside from the addition of Shulker box loading on Survival 2.

Retro Station, on the East Line of the Survival 3 Network replicated the design of a station on the original network in celebration of its legacy.