At the time of the official server’s launch in November 2015, Minecraft version 1.8 was the most recent, although snapshots and teaser for the upcoming 1.9 update had been released, which included a major update to the end dimension. Therefore, server administrator Mattigins made the decision to disable the end dimension until the server was ready for 1.9, to avoid a reset of it. Around April 2016, the server went offline for roughly two weeks to be upgraded for the new update.

The date of May 21st was made for an opening event and disseminated on the forums. Preparations were made by building a structure and dungeon around the nearest end portal to spawn, roughly 1000 blocks north of Spawn City. 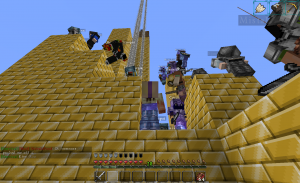 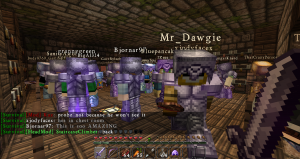 Players in the loot chest room of the portal dungeon

One of largest crowds in early server history turned up for the event, around 70, including server owner ReNDoG. Players were told to meet at the world spawnpoint before moving to the Grannydog Monument across the water in the city. ReNDoG 'opened' the monument by replacing the final 8 dirt blocks with gold ones. The co-ordinates of the portal were announced in chat and the group of players quickly sprinted to them before jumping down the dungeon. This dungeon had several hard to navigate areas, with some parkour sections and clues as to where to head next. It culminated in a smaller room, packed with chests that contained uniquely tagged iron armour and weapons. Once much of the group was equipped, the portal was opened and the Ender Dragon promptly defeated for the first time. All attending players were given an elytra to commemorate the occasion.