The Mall on the Survival 1 world of the Dogcraft Server was a staff created and sanctioned commercial district where players could trade and sell items through shop chests in exchange for Dogcraft Dollars. The Survival 1 world was launched without a Mall in late 2015, and the Mall was created after a general consensus that one central place for trade was needed. Throughout the history of the Survival 1 world, there were two official malls made. 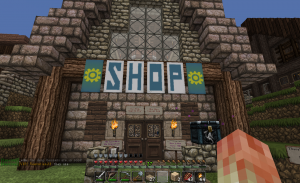 MasterMind_DC's shop in Spawn City, before the advent of a sur1 Mall.

Before the Mall, some attempts at this were made. A couple of shop buildings were created in the world's Spawn City of note; FreakSound's MoleMart and MasterMind_DC's shop were moderately successful in the very early part of the world. In January 2016, a river section of Spawn City land was land-filled to create space for a shopping district. The district was not particularly organised and never gained significant momentum. 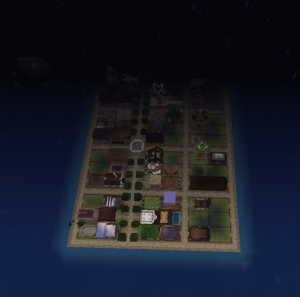 The First Mall in survival 1 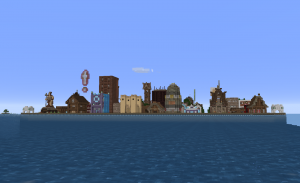 Skyline of the First Mall

A few months later, it was decided that a designated 'mall' with its own warp would be beneficial to the server population. In July 2016, this first Mall was created. It was accessible to all through the command /warp mall (and later, /warp old_mall). Plots were a one-time purchase of 2000DCD. The Mall had a simple layout, which required expansion multiple times because of the demand for plots from new players. Possibly the most prominent shop owner of the era was 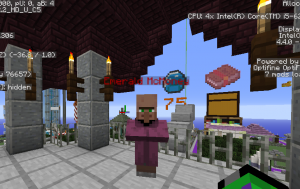 In November 2016, it was decided that a new Mall would be created as the original one was not intended for the scale it had reached. A plus-shaped design was created with a significantly larger amount of plots than the original, 210 in total. It was split up into four districts - yellow, red, blue and purple, and featured multiple plazas of builds from staff members.

Players were able to purchase plots on the dogcraft.net website through a specially designed interface in exchange for DCD. The 'Emerald McMoney' quests NPC was also located in the Mall. The NPC would collect emeralds in exchange for a one-time DCD reward. This Mall was the first to use a rent system to prevent inactive players from clogging the centre plots, as had happened at the original. Plots could be selected and rented from the dogcraft.net website, and were 1000DCD per month for normal plots and 2000 for double plots.

The malls were very successful and appealing as it allowed for trade to be organised in one collective place. For shopkeepers, this allowed them to easily compete on prices as everyone had their shops in the same location and likewise for buyers it made it a very convenient location for purchasing items. The success of the malls quickly lowered the value of a number of goods, leading to the implementation of the 200-diamond rule for elytra. The success of the malls would lead to them becoming a mainstay of the server.