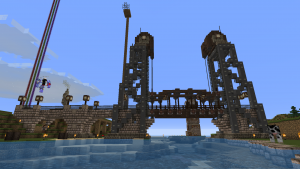 Soms was a town group project on the Survival 1 world created by the server moderators of the time for themselves in an initiative to increase moderator collaboration and as a team-building effort. The desire came to build the town from within the mod team at the time in late-2016. As the head of the SRN, then-moderator _edo was tasked with finding a suitable location for the proposed project, which was suggested to be at the site for the then-known-as North3 Station. A station was built at the location and eventually linked to the rest of the North Line.

Founded on October 27th, 2016, the aim was to construct a town with a steampunk aesthetic. In the first couple of days, a number of builds were erected. However, at the start of 2017, interest in the project waned and progress slowed to a halt. This is cited to be due to a lack of moderator commitment, despite its promising ideas. Though large amounts of land was cleared out, much of it remained empty and when the Survival 2 world began in September 2017, any future plans were abandoned.