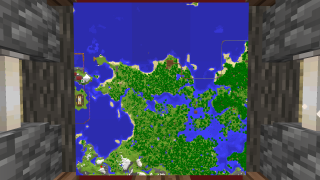 Located in a Birch Forest the station used spruce and birch wood accompanied by acacia logs in its design. The station was built as a midway station for passengers to get off before reaching the next station where secondary lines would be able to connect. Therefore, it only had two platforms for the main line to travel from. Outside the station was a small tower, giving the ability to take of with elytra. Being on the coast also gave the opportunity to travel by boat from here.