North West Station was a station on the Survival Railway Network on Survival 2 which was created to connect the continent situated West from Spawn to the SRN Network. The station featured a connection with West Station and the Nitwit Railway Line serving Quasi's District. 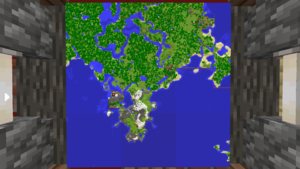 North West Station was on the coast of the Western continent next to the spawn of Survival 2 located in a Forest Biome. Using mainly stone bricks and spruce for the design, it housed 2 platforms for main connections and space in the basement for up to 3 Secondary lines. Despite plans for a connection to West Station, this was never utilized. One of the secondary line slots was occupied by the Nitwit Railway Line, connecting to NRL Station in Quasi's District. The station was built and designed by