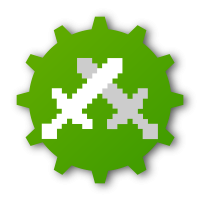 Minigames are special fast-paced games that players can play on the Dogcraft server in addition to the regular survival worlds offered. Over the years, several Minigames have come into and out of being available on the server with many becoming popular. Many of these games have proven themselves to be highly popular and during occasions where ReNDoG visits the server, he often plays one of the games with his stream audience. The games can be accessed through the server hub, or through the use of the /servers command.

Nitro UHC (or Nitro Ultra Hardcore) is a variant of the popular Ultra Hardcore gamemode in which natural regeneration is disabled and players must battle it out to be the last one standing, fighting and crafting to build gear and to survive. Nitro UHC increases the speed of the game dramatically, as all the necessary weapons and armour can be dropped by killing animals and monsters. The game lasts twenty minutes, after which players are sent to one of several death match arenas to determine the winner.

Hide and Seek is based on the Block Hunt gamemode found on other notable Minecraft Servers. In it, "hiders" must evade the "seekers" by blending in as regular block tiles in a number of maps. The seekers have three minutes to catch all the hiders, else they will win. Each time a hider is caught, they turn into a seeker and must hunt out the others. Several maps were built for this by various community members, including some trimmed versions of player's Survival world bases, such as

ramokhan's boat level. Hide-N-Seek was made unavailable following the upgrade to 1.13, however returned on the 22nd of November, 2019 running on the 1.14: Village and Pillage update.

Bedwars is another survival player-versus-player game in which players spawn on various islands with a bed and must exchange items dropped by "generators" for equipment, blocks and upgrades. Players are able to respawn, provided their bed is kept in tact. As such, balancing the protection of your bed with attacking other players and gathering resources from generators is the main challenge behind this game. There are several arenas available that were built by the build team. However, Bedwars is currently not available as of the upgrade to 1.13 world.

The Mob Arena is a gamemode where players must fight waves of monsters in an arena. For each wave they clear, they can earn Dogcraft Dollars. Players first pick a set of equipment to enter the arena with and then must fend off the monsters. While the mob arena is no longer available, a leaderboard showing the best scores could be viewed on the website at https://dogcraft.net/mobArena.php, however when the website updated in 2020, the leaderboard was lost.

Dogcraft offered a number of Parkour (jumping puzzle) courses of varying difficulty. Players could access them through a warp room which would let them access the various levels. However, towards the end of the Survival 2 era, the functionality of the Parkour game was broken and thus it was subsequently removed.

For the first six months or so of the server, a version of the popular Skywars minigame was available to play on the server, in which players were put against each other to fight it out on islands in the sky. After awhile, however, it was removed from the server.