Nitro Live is a series of competitive Nitro UHC tournament events held on the Dogcraft Server. The first event, Saturday Nitro Live, was held in August 2019 and Nitro Live: Season 2 was held from November to December later the same year. In 2021, a third event, titled Nitro Live: Season 3 was held over about a week through the end of January and early February of that year.

William278, who was also a member of the Events Team. After five weeks,

Gupta99999 was determined the winner after beating runner-up

Xman404 in a final set. The second event was organised by William, Gupta and

darparniox; the tournament was ultimately won by nossi. The third event, organised by

RY44, featured a revised format and took place across one week.

ThEquinox2, who came fifth in the original event won the third season, followed by William and

xMakoto in second and third respectively.

The tournaments were comprised of four stages; Qualifiers, Quarterfinals, Semifinals and Finals.

In the qualifiers, players were split into groups based on their timezone. When registering, players could either choose to register on the 3rd or 10th of August 2019.

Players who qualified were divided into groups of three for the quarterfinals. The players had to compete in a game of Nitro UHC and the top two players from each game would advance to the Semifinals.

The remaining players were placed into a 1-on-1 game. The winner would advance to the finals, while the looser would be eliminated.

In the finals, all remaining players were forced to compete for points in three games of Nitro UHC, just like in the Quarterfinals. After the two games were up, the top two scorers were made to compete in a best-of-three championship set, where the winner of the set would be declared the world champion.

The idea of a Nitro UHC tournament was proposed several times by various players since the creation of the minigame on the server in late-2016. However, it was not realized until the 20th of July 2019, where prominent Nitro UHC players

nossi_ discussed the formal possibility of hosting the tournament through the month of August, leading to the planning and development of the event. 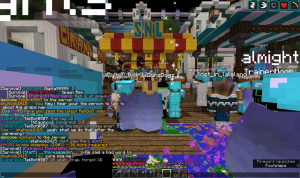 The Nitro UHC matches were live streamed and commentated on to further draw excitement and a set of rules was put in place to ensure the games would be both exciting to watch and fair for the competitors. Various guests would join William278 to assist in refereeing and commentating, including participants whilst they were not playing. For Semifinals and Finals, ReNDoG took over streaming the event live to hundreds of viewers as the tournament came to a conclusion. A special video highlighting the best moments for the tournament and advertising the finals was also produced.

nossi_ prevailed as the winner.

A third tournament was announced and held in early 2021 and took place over a week, spanning from January 31st to February 5st of that year. The event, which was organised this time by events committee members

OldManLP85 had a few adjustments to the format from previous seasons. Notably, the qualifying heats and semifinals entirely used a point based system, with 5 points awarded for deathmatch kills, one point awarded for pre-deathmatch kills and points awarded to finishing positions in games (three points for first, two for second and one for third). Returning for Season 3 was the presence of fully live streamed games, with commentary and referee support from darparniox,

dmgdog. At the end of the tournament,

† Note: Ð11,000 was given to every player who passed the qualifying rounds, divided evenly from a pool of player-donated money.

† Note: A Participants PVP Head was also given out to all that participated.