DoggyWood is a build project on the Survival 3 world of the Dogcraft Server, in which the goal is to transform a savanna biome into a city filled with film studios for people to claim and use for their own personal film projects.

TrainerMoon had expressed the need for a location to build a filming studio for his upcoming Dogcraft reality competition show, "Skin Wars." While "rtping" about,

dmgdog stumbled across a savanna biome surrounded by desert to the north, east, and west and ocean to the south. After a quick fly around the biome, they agreed this was the perfect location for the studio.

Shortly after the biome was claimed,

TrainerMoon came up with the idea to transform the entire biome into a Dogcraft replica of the Hollywood Studios in Los Angeles so that all players can set up spaces for their own personal filming projects. This is where the name Doggywood comes from.

TrainerMoon then began to clear the entire savanna biome of all trees and grass, with the assistance of

almightyanna, and mapped out the area to begin marking out plots and sections of the land. As this was going down, he discovered the location for Doggywood was fairly close to

Domino_1 agreed to add Doggywood to the route for the Branch Line. Shortly after that,

TrainerMoon enlisted the help of

expedtadam had no projects to do and wanted something to do.

The first section to be marked out for plots was the Eastern section named "News Corner." It features 10 equally sized TV Studios dedicated to various groups throughout the Dogcraft Server. 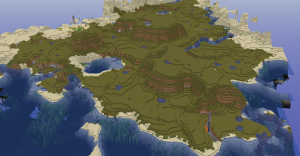 After clearing out the trees and grass