_Shako, or Shako (pronounced SHAY-ko), also sometimes known as ShakoRam or ShakoMC, is a Cyberdog who joined Dogcraft in Summer 2020 during Survival 4.

Shako began playing Minecraft in March 2011 with the username nitromegamer, having previously been a fan of Nitrome, though he currently does not play any other games. Other past usernames include SpaghettiGoat (2015-2019) and ShakoRam (2019-2020). He played on a small SMP server from August 2011 until it temporarily closed in May 2020, and he currently manages buildings and infrastructure on a friend's Five Nights at Freddy's-themed Bedrock Edition realm. 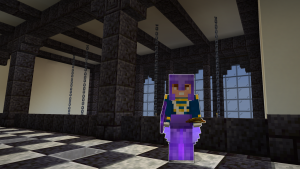 Shako stands in the atrium of the Vitruvius Town Hall shortly after finishing construction.

Shako joined Dogcraft while a server he had played on continuously since 2011 was temporarily closed in mid-2020.

He is most active as a member of the Road and Horse Network (RHN), for which he constructs and documents roads. He began by straightening and widening Gaia Road on Survival 4 and then volunteered to build the roads around the Spawn Sea and south to Lotus which had been planned by the RHN.

In Survival 4 he built a large town called Vitruvius, 2.5km south of Gaia. However, his primary functional base was a four-story house, called _Shako House, immediately adjacent to the Gaia city line.

Throughout September 2021 he built the Nether Tunnel Network overworld tower at 30 kilometers (30000 blocks) south on Husky as an entry in the NTN tower build contest. The building is postmodern in style and is nine stories high including a partially-underground bottom floor.

In Survival 5, he is building a mega-base based on a dreamlike abstraction of a typical American university campus. Most of the structures are based on either real-life buildings or common styles found on collegiate buildings, and they are mashed together to form a continuous interior space. At the center is a replica of Bradfield Hall at Cornell University by architect Ulrich Franzen, and the storage hall is based on Barton Hall, also at Cornell University, by architect Lewis Pilcher.