The MoleMart was a very prominent and well-known build in the Spawn City of Survival 1.

The build was created by Barganour, known by most on the Dogcraft Server at that time by FreakSound, and subsequently known as Miss_Eve_Gaming and Flaming_Angel. It was one of the very first builds to exist in any official dogcraft server, built during 'pioneer times' in October 2015. It was located right in the centre of the city and is obvious to any new players, directly ahead of the rules room.

The build was a near replica of the build of the same name in ReNDoG's Mole City, from his original survival series. However, it had a singular but glaring difference, being the roof design, which was much more colourful and flat. 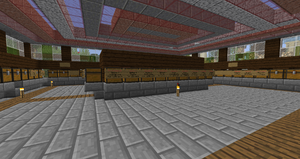 The MoleMart was used throughout Survival 1 as a shopping area, with very limited success. Initial interest made the concept feasible, mostly due to a lack of designated commercial area in the world, but this tapered significantly once the first mall was built in 2016. The MoleMart gained a reputation for housing shops for new players with uncompetitive pricing, and was plagued by permission issues at various times.

The MoleMart was the location for one of the first set of server quests to be introduced. The quest 'Gustavo' involved talking to (right clicking) a NPC of the same name, perpetually running around the MoleMart premises from June 2016.