The Survival 2 Railway Network (SRN) was a network of railways across the Survival 2 world with the mission of providing high quality rail transport service by building four main lines in each cardinal direction and coordinating the connection of secondary lines from players to these main lines, while ensuring a scenic journey for travelers. 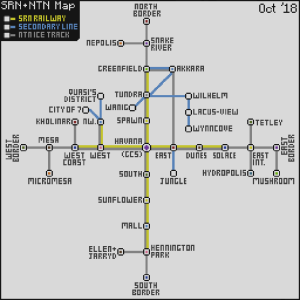 In-game SRN and NTN map, built and designed by misterblue28.

The network takes a very similar shape to the previous. Railways expand from Grand Central Station in the four cardinal directions, each having multiple stations along the line. This allows the rails to be expanded as required to connect as many destinations as possible.

Secondary Linescould be built by base and town owners to their build, in consultation with the relevant Line Manager. Secondary lines are connected to the most appropriate SRN station.

At the close of the network, South line had grown to the longest (7062), and was the first SRN line to become four stations long. East (5029) and North (4712) followed closely behind. Although much shorter at only 2910 blocks, West line featured the only non-cardinal SRN station of the world, Northwest, a 2010 block expansion north from West Station.

Northeastern areas were the most popular for secondary lines, featuring two separate instances of a such a line connecting to both North and East lines. Both the Akkara and Wolframian networks had a large impact on the overall shape of railways on the world.

The Survival 2 Railway Network was headquartered in the City of Havana, in a building adjacent to Grand Central Station. The building contains information about the project, functions as a storage center for the materials used to build the railways, and has decorative offices for the Line Managers and Conductor as well as a bar area

In addition to the main build, an adjacent Secondary Line Office building provides space for offices and information about Secondary Lines that connect to the main stations. Unfortunately, the buildings was underutilised, and has few complete rooms.

Setting up for the New World

After the announcement of the new Survival 2 world at the start of June 2017, the SRN immediately shifted focus away from the original Survival world. Suggestions were taken for features of Spawn, where a railway station was mentioned. Shortly after, well-known SRN member _edo was approached about building such a station, and along with Brianetta and darparniox, was invited to the creative world where Spawn was built. The trio had several misunderstandings with the build team, and were dissatisfied with the location assigned for the station, citing that it was difficult to access and limited growth. Therefore, the decision was made that Spawn Station would become only the first station on the North line, and that the central station would be renamed Grand Central Station, to be built as the basis for the City of Havana.

Come the launch of the world on September 2ⁿᵈ, previous SRN members became confused to find that Spawn Station contained only two lines. This was later clarified after the announcement of Havana. Line managers were introduced a few days into the world, to delegate duties of managing construction on each cardinal line and ensure more consistent progress. Aeghu (East) and Skelleton123 (West) joined darparniox (North and South) in these roles. At the same time, the ill-fated Secondary Line Manager role to mediate connections between the SRN and secondary lines was given to OPwrecker, although the role proved largely unnecessary and was discontinued in the following year. 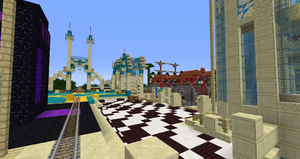 For the first time, the SRN was present at the start of a world, so players first needed to gather their own materials and feel comfortable before rail construction could start in earnest. East, West and South line planning began, and the link between Spawn and the freshly constructed Grand Central Station were all complete before October. During this time, the player rid3009 caused issues, starting a rival railway network, the Base Transport Network (BTN). While this in of itself was not an issue, the player caused greifing of the early Wanigoora secondary line and town area, as well as misleading 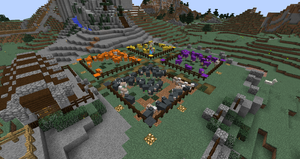 several players and bizarrely, tried to pay server admins iron ingots in exchange for permission to build railways at spawn. 'Rid' was banned a few weeks after joining the server, but left a lasting infamous impact on the SRN team.

West and East Stations were the first from the central station become operational after launch in early November. A wool farm was built at the former for SRN, NTN, and Havana members combined. North line had made progress and reached the site of its next station, whilst a secondary line from the site to the in-progress city of Akkara was completed. South line made progress, culminating in the completion of the line to the South Station site. At this point, marbou9 relieved darparniox of South line manager duties, completing a full team after he had helped extensively with the line there. 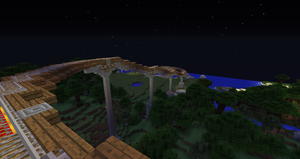 2018 brought the opening of the Mall on January 8ᵗʰ. The location had been spotted earlier by contributors of the Great Survival Map project (itself being run by SRN members), and noted as being an ideal place to be added to South line. Thus, the Mall build team were approached and Mall Station was built during December in advance for the opening. However, the line could not be connected for build team secrecy concerns, therefore, this took priority after launch. Once the line had been completed, players observed that it would often kick a player from the server, due to inactivity. A plan to build an in-between station was devised in February, and resulted in Sunflower Station, the only station to be built retrospectively to a further stations completion.

Attila_'s Wolframian railway network had made good headway during 2017, but its redstone junction connection to East line caused controversy in January, as it required players to act in order to stay on the East line as they traveled, or be diverted. An extensive discussion ensued, with the outcome that all future secondary line would need to connect to a SRN station with a dispenser. This line was also influential in that it was the first to make widespread use of curved railway sections, a practice later adopted by almost all line builders, a phenomenon jokingly termed 'curve-itis'.

Progress in the first third of the year had been solid in the meantime. All four lines had some sort of expansion, including the construction of Tundra, West Coast, as well as the aforementioned Southern stations. Due to lack of play time, Aeghu resigned as the East line manager and William278 took his place, making an immediate impact with the completion of Dunes Station within a week of his appointment. SRN HQ, which had been under construction since January, and had been mostly operational since mid-February, was finally fully furnished on April 4ᵗʰ.

Builders of the Great Dunes Bridge, May 2018

During March, several SRN members were contacted by the player satdownpro, who had created a new railway network - the Transport Organisation Authority (TOA). After several strange, provocative and unproductive encounters with the player, the parties eventually settled that the TOA could be connected to the Akkara secondary line. By this time, many SRN members had noted his similarity to rid3009. In a bizarre turn of events, he asked for suggestions for a new username, in which William278 suggested 'TheNewRid'. He accepted the suggestion, and became the second part of 'the Riddening', a term used to describe the extraordinary actions of the two players by SRN members. Soon after, TheNewRid was banned before his connection was completed, only adding to the parallels of the two. 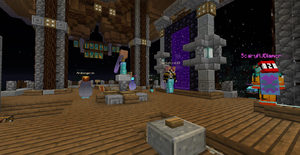 Hennington Park Station opening, only a week before the public announcement of its demise

From May and onward, progress continued smoothly. During June, a boom in SRN activity saw Northwest, Greenfield and Sunflower stations, which had all been in some semi-complete state, were fully finished. East line made good progress, as did South. Solace Station was completed shortly afterwards. During July, misterblue28 designed and completed a combined SRN and NTN network map, a great achievement, and it was hung around all stations. At the end of the month, ReNDoG revealed that the SRN was the major influence on his primary project for his Hermitcraft Season 5 series, the Hermit Railway Network (HRN). Progress was slow toward the end of the world, but finished with a flourish, Hennington Park Station and North line extension to the Snake River Station site being completed in October, the final month of the Survival 2 world. Many of these later lines had been a real group effort, a large team doing much of the early Solace line, OPwrecker and 'Cool Beans' ChrisTheWalrus responsible for much of the Northwest line, while Mrs_Diss and briggsmech had been major helpers among many on the Snake River line. These types of activity set a blueprint for more mass building later on.

The SRN was frequently mentioned when naming many of the major achievements that would be lost when Survival 1 and 2 would be deleted in late October 2018, a testament to the perceived quality and longevity of the project. 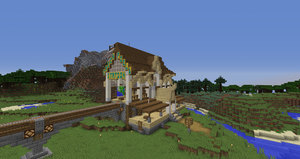 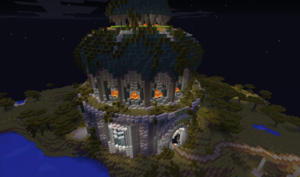 Solace Station, next to the Kingdom of Solace 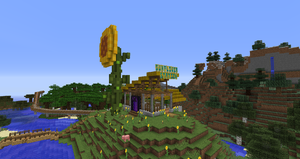 Sunflower Station, at the intersection of four biomes 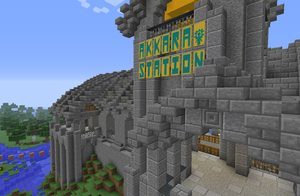