Skyblock was an original world on the Dogcraft server, opening with Survival, Amplified, MCMMO and Creative. Skyblock contained a void world in which a player could spawn an island. The island would contain a small kit of materials which the player would to be tested to use to obtain other materials and complete challenges. The nether was available with two small islands, but the end was not. The spawn area was small and unremarkable, since there was no practical need for it to be. The world was removed with the update to Minecraft 1.13: The Update Aquatic

Each island was scored and a high-score leaderboard kept. Every block on the island corresponded to an amount of points (e.g. emerald block = 150 points), which would be added together for a final score.

Challenges were present both for a sense of achievement and for necessity as they would give rewards of items that were needed for further challenges. 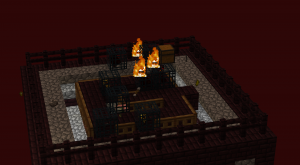 A nether mob farm on the Skyblock world 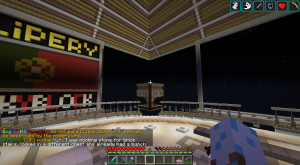 Lipery1's island, in its early stages

Lipery1 was the owner of the highest ranking island on the world for effectively its entire history. It was started near the beginning of the server and was added to until well into 2017. It featured many farms, and the island eventually grew to a 100x100 block space from y:0 to y:256. A couple of players assisted with the island, which completed every available challenge. A museum was also built there, with every block in minecraft except for sponges.

The second ranking island on the world was owned by Brogaman, and built between December 2017 and February 2018. Other considerable islands that are known are the islands of kimandjax and another by xtiffykitty and xclickitx.