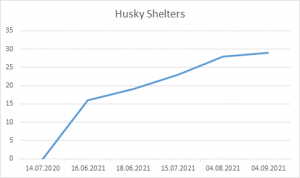 This is a list of shelters made by the Road and Horse Network on the Husky Dogcraft Server. RHN has mainly been on Husky while the .Path Network Group has worked on Beagle.

Shelters made by RHN are made so players that chose to travel through RHN roads can get some rest at night or other time of the day. It helps new players to sleep through the night and to fight off mobs that spawn.

This list will provide you with shelters that exist in Husky. It shows the name, it's coords and if it has a phome or not. As of July 21st 2021, there are 25 shelters across the world of Husky. The RHN Centre serves as the headquarters for the project.

TyrantrumGOD maintains a spreadsheet of all RHN stations.

The following shelters have both not yet opened as a result of permission issues.

This page was last modified on 4 October 2021, at 12:24.
Category:
We are running a competition to select a new background image!
Head to Screenshot Competition to enter any of your image(s) from Dogcraft!