Hennington Park Station was the southern most Survival Railway Network station on Survival 2, being the fourth and final SRN station on the South Line. It was the first ever fourth station on any line to be built.

The station was built primarily using polished andesite, spruce wood and various other stone types. The minecart dispenser system was built to standard SRN specifications. On the NTN map, it was represented by the colour orange.

The route to Hennington Park Station, starting at Mall Station, was planned out by South Line Manager Marbou9 starting on June 5 2018, closely following the opening of Sunflower Station. The station is located on a hill in a taiga biome, but as 'Taiga Station' was considered to be too boring, Brianetta made up the name 'Hennington Park', despite being fictional because it sounded 'vaguely posh'.

Construction of the station started only a few months later, and the station was declared finished on October 6 2018. In the middle of the station, an armor stand with a villager head was erected to commemorate "J.B. Hennington" for 'reaching the Farlands', as to provide fictional background to the station name. It was the final station to be completed in Survival 2. 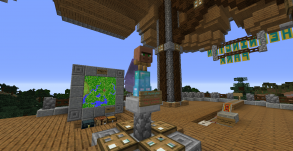 The statue which sits in the middle of the station.
Retrieved from ‘https://dogcraft.net/wiki/index.php?title=Hennington_Park_Station&oldid=11694’
Categories: