This station is made out of 2 parts, an ornamental concourse and a functional platform room. The concourse was designed by

marbou9, with additional input from

Broga_. It consists of several towers and multiple roof sections, in a blend of modern and fantasy styles. The concourse was built by

expedtadam, with a roof by

cosmicflow. Inside, it contains the main lines and 2 branch line slots, as well as a map, nether portal, basic amenities and a bed. The diorama immediately to the west was built by

The design was built before the opening of survival 4, using a roof design expedtadam lifted from the town hall of a private survival server, built by CosmicFlow. From there the station was designed based on the block palate. Construction of the station commenced in early June 2020, with the rails being largely by StenLLuk 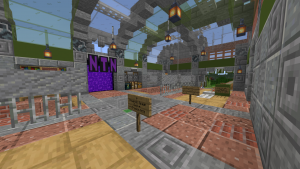