Difference between revisions of "Dressrosa"

Dressrosa was a town base build from the Survival 1 world. Because of the extensive surroundings of the town, the area itself has been posthumously referred to as Dressrosa. The area 'Dressrosa' was located around 2000 blocks South of Spawn, and could be split into several distinct parts. 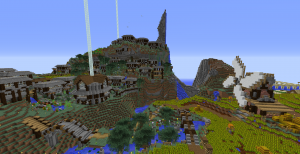 The first build in the area was the town of Dressrosa itself. Although the exact starting date of the build is not known, it is estimated to be in late 2015 or the first couple of months in 2016, near the beginning of the Survival 1 world. The town followed a rather strict palette and style, as well as covering a sizable space of land. The town included a town hall, 'grotto' underground section, as well as numerous residential buildings and agricultural features, set among a snowy mountaintop. On its eastern fringe was SRN's Dressrosa Station, which was completed well after the town had regular development in May 2017.

FilipinoTurtle was the primary builder of the town, although houses by

Shushichop were made, with the latter also appearing to have built a chunk of the southern section in the town.

Other adjacent features included an unnamed castle wall to the South and a series of rustic bridges and a wetland further East of the Station. 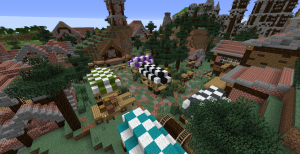 Although seemingly un-cordinated with the other parts of the Dressrosa area, Darkwell was another town build by

sp4rks87. The rural village was populated with giant mushrooms. Players

xPKx_Ninja also resided at the build.