Chaincastle Station is the second SRN Station on the Survival 4 Beagle North Line. The construction of the station was primarily done by

Dudelmaster. Chaincastle Station would open to the public on the 6th of February 2021 and it is currently the terminal destination of the Beagle North Line.

The station is built in a medieval - fantasy style, with stone brick, blackstone and magma blocks making up the majority of the block palette. The station also boasts a central spire where players can swim up to the top via a bubble-vator for a view over the surrounding area.

The interior features a floor made of crimson stems and has NTN access. As well as the two north line terminals, the station also possesses a branch line terminal for a potential future expansion. 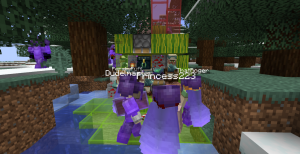